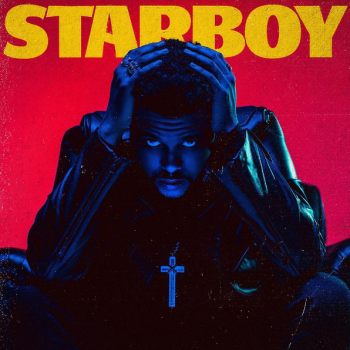 The character of The Weeknd is an anomaly in R&B. While casual hedonism and nihilistic impulses are nothing all too rare, there’s an oppressive stoicism to his sound that thrives on bleak atmosphere. It’s the factor that makes it so surprising that The Hills and In The Night were such huge hits, given how far removed they were from pretty much anything else at the time. But despite that portrayal (or maybe because of it), The Weeknd has become a star in his own right, but if there’s anyone who takes umbrage at that fact, it’s The Weeknd himself.

As a result, Starboy sees The Weeknd attempting to rally against his newfound status, not just by continuing to wallow in his own darkness (which, for a good portion of this album, he does), but by outright dismissing it. The title track has him chiding the public who made him famous, allowing him to continue to embrace his toxic lifestyle and putting him on a pedestal for it. More affecting still is Reminder, with its washed-out pianos and cavernous beats providing a much more fitting backdrop than Daft Punk’s polished neon shuffle, where The Weeknd tries establish himself as no sort of role model, and the misguided nature of his Teen Choice Award nominations and exposure to a young audience. Starboy gets away with using the usually torrid R&B / hip-hop clichés of women and drugs with this sort of self-awareness, with The Weeknd knowingly admitting his lifestyle isn’t one to be glorified and giving this album something of a human quality beneath its exterior.

But note the use of the word “attempting” for how The Weeknd goes about unraveling his celebrity status, as, especially instrumentally, a fair portion of Starboy puts aside the bleakness and embraces the conventions of modern pop and R&B. Lyrically there’s a sense of greater maturity here, moving away from the reckless lust of his previous material into something more closely resembling actual love for the women he talks about, and combined with moments of instrumentation that are some of the most lively and colourful of his career, Starboy‘s role in The Weeknd’s character arc almost feels like a coming-of-age chapter, growing up and finding out who he really is. The problem with that is it’s not nearly as compelling; where The Weeknd might state that his debauchery is not something to be idolised, there was an antihero quality that set him apart from other artists, and to see it more or less ousted in these tracks is disappointing to say the least. So while the sleek synth-funk of Rockin’ or the second Daft Punk-produced disco lento track I Feel It Coming hit the brain’s pop centre in the same way that Can’t Feel My Face did, they feel emptier and lacking in the heavy pathos that characterises The Weeknd’s best songs.

Of course, these sorts of moments are still here, and naturally they make up the majority of Starboy’s highlights. Party Monster stews in its own pitch-black exaltation in possibly the album’s darkest track, while False Alarm occupies the panicked middle ground between darkwave and skittering, blackened drum ‘n’ bass, and there’s a grime that comes in Sidewalks thanks to the squalling blues guitar that backs both The Weeknd’s distant, heavily AutoTuned crooning and Kendrick Lamar’s spitting. It’s all amplified by The Weeknd’s consistently blank-faced delivery, sucking any sort of emotion out of these tracks without making it seem lazy.

But that brings up possibly the most prevalent issue about Starboy – if this really does represent The Weeknd’s growth as a person, moments like this almost completely contradict the intended arc. It feels as though the bookends of this narrative have the solidity to work – the title track and Party Monster sees him owning his lifestyle while questioning his viability as a mainstream artist, and Die For You and I Feel It Coming see him motivated by love and emotion rather than blind indulgence – but what fits in the middle doesn’t quite click. The jarring mix between bleakness and colour never hits a healthy conversion, and because of this, there are moments that don’t really work. Future’s rambling on All We Know massively outstays its welcome even though it is some of his most competent technical rapping in a long time, and the description of the literal car crash lifestyle on Ordinary Life probably feels the most out of place, given its closeness to the album’s revelatory climax.

It all can be linked back to the initial message of the title track – even though The Weeknd resents his position as a mainstream artist, Starboy is probably his most pop album to date, one that works a lot better in individual pieces than as a complete body of work. There are some genuinely great songs on here, particularly Party Monster and Sidewalks, that’s something that unfortunately can’t be ignored. Starboy does nothing to shift The Weeknd’s position as one of the most unique and fleshed-out characters in modern R&B, but the fact that there’s no telling what happens next is both a blessing and a curse.

‘Starboy’ by The Weeknd is out now on XO Records / Republic Records.