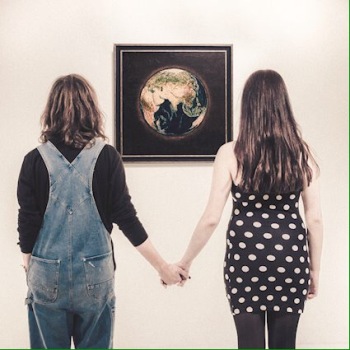 Considering the direction the Britrock boom took a few years back, it’s somewhat surprising that Asylums chose to go the way they did. As easy as it would’ve been to do another blatant emulation of Hundred Reasons and call it a day (just look at all the bands that still have careers through that very method), the Essex band’s debut Killer Brain Waves shared a lot more with acts like The Automatic or Yourcodenameis:milo, balancing on the Britrock precipice by way of slightly nerdier indie-rock sound. Fast forward to 2018 and it’s definitely paid off; you’re more likely to entice your average alt-rock fan today with a band like this than another interchangeable group of bores.

That’s perhaps Asylums’ biggest selling point of sophomore album Alien Human Emotions – the reference points they draw from might be blatant, but they’re skewed in a way that highlights how appealing they are to a modern audience, and how they fit into the rock world in 2018 effortlessly. Just take the overblown, hyper-energetic whirrs of When We Wake Up or Napalm Bubblegum that supercharge modern indie-punk in the best way possible, or the slight slacker bent that Graveyard Tourism takes that still has muscle and depth. And of course, it’s all topped off by themes of disillusioned youth weighed down by unfulfilling relationships to the backdrop of a discordant political system that only wants to bring them down even further, something that makes a song like Millennials pulsate all the more with frustration.

It all culminates in the sort of awkward, slightly off-kilter but infectious listen that’s taken the pedestal for modern alt-rock, and even if a closed-in production job can sometimes lead to synth-work being a tad too blaring and obnoxious for its own good, Alien Human Emotions undoubtedly works for what it wants to do. There’s an antsy nervous energy that goes far, and even on more downbeat cuts like Critical Mass or Sexual Automation, there’s a lot that can be brought out through how palpable the sense of dejection is, leading to an honesty in Asylums’ music that really pushes them forward.

And though most of this is pretty much par for the course with indie and alt-rock in this vein, Asylums definitely have a knack for incisiveness that ultimately places them a couple of steps ahead. That’s definitely a good thing too; this is a band who’ve thrived in a scene built around them rather than the other way around, and Alien Human Emotions is testament to a vision that remains so resoundingly focused and accessible.

For fans of: The Automatic, The Amazons, Fizzy Blood
Words by Luke Nuttall