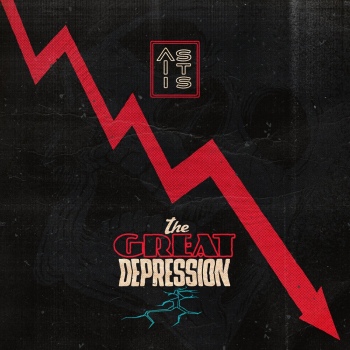 For as much as they’ve been pushed by the industry machine as yet another crop of handsome pop-punk boys, the niggling feeling that As It Is want more than that has been present for a while. The turning point was last year’s okay., an exploration of modern day neuroses wrapped in a candy-coated aesthetic as a means of representing how society views anything of the sort as a sign of weakness, and that repression is the best way forward. Anyone can agree that’s a fairly mature and nuanced sentiment for a mainstream pop-rock album, and although flawed, a handful of genuinely excellent tracks like Austen offered sizable hints that As It Is could really do a number in this vein. And everything surrounding new album The Great Depression – right from the drastic change in image that threw everyone for a loop – seems to be heading in that exact direction, stripping back the ‘50s plasticity of okay. for a darker, more forceful look at mental illness and its continual misrepresentation.

And even with as easy as it’s been in the past to sneer and dismiss As It Is as just another flavour-of-the-month band, The Great Depression is an impressively realised and robust album in which evolution is much more than a buzzword to be thrown around to justify a retained mainstream presence. The brighter pop-punk bounce of old has been well and truly relegated to an occasional accompaniment, replaced by grittier, more powerful post-hardcore and a vocal performance from Patty Walters that highlights a sense of instability more than ever before. There’s still a bit of awkwardness with his more nasal voice juxtaposed against this more overtly rock instrumentation, but given his affectation for slipping into the odd scream that feel completely off-the-cuff, and the fact that this is primarily his own performance with Ben Langford-Biss sticking to guitar rather instead of also a rougher vocal counterpart, there’s a sense of personal reverence and importance that Walters really does well at capturing.

And over-complication in the tracklist aside (the four “stages” it’s split into don’t serve that much of a purpose overall), the focus that The Great Depression demonstrates really hits some effective points, with Walters taking aim at systemic issues with providing help for mental health (particularly for men on The Stigma (Boys Don’t Cry)), and on The Wounded World and The End, how reassurance of help and just someone to talk to is thrown out there, but rarely followed up on. But in a display of nuance that has quickly become As It Is’ secret weapon, Walters also turns the focus on himself and how such ambivalence affects the sufferer, craving someone to be there for reassurance on The Handwritten Letter, but being plagued by the constant fear of bringing them down on The Truth I’ll Never Tell, and thus repeating the cycle of toxic festering emotions all over again. It’s all presented in a way where the initial lack of knockout hooks feels justified too; for what’s intended as a more raw, real album, there’s a cutback on that sort of artificiality, and As It Is prove that they can do it well.

They could definitely do it better though, and that’s where the main problem with The Great Depression lies. As It Is are clearly pinning this album as an enormous step forward into experimental territory, but when viewed next to okay., a lot of the polish might be gone but it’s really no different. The bigger issues may be tackled in great detail, but at the end of the day, this is still a mainstream-accessible alt-rock album that this band have been putting out since day dot, and it would be far more beneficial for them to move out of that lane. You can’t fault them for trying – the fact that Underøath’s Aaron Gillespie features on The Reaper speaks volumes in that regard for a presumed equivalent to last year’s Neck Deep / Sam Carter collaboration on Don’t Wait – but he’s barely given anything to do, and with the out-of-place synthetic undercurrents of the title track and The Question, The Answer, it shows how wary As It Is are at alienating their audience, but reining it back in this way doesn’t help them. If anything, it perpetuates the image of a band playing for the acceptance of the mainstream instead of making an organic progression, and considering the overall aim of this album couldn’t be further from that projection, it’s going to take some retooling to make the next one hit harder if this is how they’re planning to continue.

For what it is though, The Great Depression is an unexpected move for As It Is, not only as a sonic shift but in adding a further few layers of longevity that okay. already had an ample supply of. And if there’s one reason not to write As It Is off, it would be that; where so many bands are content with rehashing their same handful of archetypes again and again, the fact that As It Is have been a lot more tactful in their approach for three albums out of three shows a band willing to grow and adapt to an impressive degree. There’s more growth to be done, that goes without saying, but there’s been enough faith and good will accrued to believe that As It Is are only going to carry on getting better.

‘The Great Depression’ by As It Is is released on 10th August on Fearless Records.