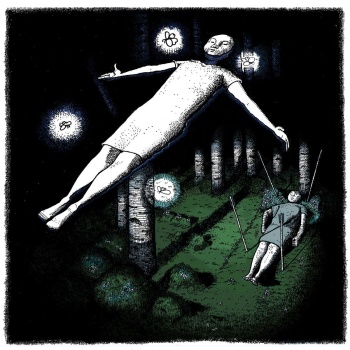 Emo’s continued monopoly on alternative music has brought a lot of bands to the fore who might not have necessarily made it there once upon a time, and thus it makes sense that, now that the call has reached Great Grandpa, they’ve undergone something of a significant evolution. Their 2017 debut Plastic Cough was enjoyable enough as an indie-pop-punk album, but it feel victim to an overcrowded scene that really did it no favours in terms of standing out. And so, Four Of Arrows – fittingly named after the Wildwood Tarot card symbolising rest and recharge – feels like a much more weighty album, both conceptually and musically. Pre-release track Digger has already shown how far this band can go into the territory of expansive indie-folk and pull it off to stunning effect, and continuing down that path has the potential to result in something really special.

And that’s exactly what Four Of Arrows does, resting on an already stable emo foundation but injecting such a lushness and delicacy to make it stand out so much more. The touchstones to classic pop and the more opulent branches of ‘60s and ‘70s music do feel apparant, but Great Grandpa bring a sense of modern emotionality and ennui that keeps it rooted in the scene, but never so firmly that there’s no room for any sort of movement. The fluidity on display is truly excellent, and the way that Great Grandpa so use it to their advantage with such meticulous detail really does set Four Of Arrows apart from so many others like it.

That’s a key asset to have as well, because at its core, it’s fairly easy to see how the connective tissue between this album and a lot of other emo aligns, particularly lyrically. Topics like death on Digger and divorce on Split Up The Kids have tangible emotional touchstones, but it’s just as easy to place an album like this among so many other displays of modern-day numbness that’s become such an unfailing reference point within emo, even if the quivering vulnerability in Alex Manne’s vocals help sell it a lot more. That familiarity isn’t necessarily a band thing though, as shown by its overall synthesis with the presentation, and how the deeper, more arranged instrumentation provides a far greater boon to these tracks. The fact that the natural bedrock of these tracks comes from pianos and acoustic guitars cultivates that bigger, more open sound on its own, and with the hazy progressions of Digger and Mono No Aware, or the country touches on English Garden and Rosalie, there’s an earthy, rustic quality that brings so much extra weight and emotional pull to these tracks. Even when Great Grandpa do channel a more straight-up rock sound on the likes of Bloom and Treat Jar, the knowledge of crescendos and surging, evolving progressions makes them feel so much more compelling, especially when Great Grandpa can bring so much instrumental colour and variety. Topped off with production that’s typically warm and rich but unafraid to tap into the more barren, brittle side of the genre that, at its best, captures the emptiness that the band convey so well (again, see Digger), Four Of Arrows sees Great Grandpa move into far more daring and interesting climes in what feels like the best way possible.

What’s more, it’s the sort of huge leap in quality that tends to catch so many off guard in the best way, and this feels no different. There’s a resonance to this album that’s never been present to this extent in Great Grandpa’s wheelhouse, and tapping into it so effortlessly and effectively makes Four Of Arrows hit with so much more force and long-lasting impact. This is the sort of emo album that really stands out in a scene where it’s needed more than ever, and Great Grandpa have the skills necessary to really go some impressive distances off the back of it.

‘Four Of Arrows’ by Great Grandpa is released on 25th October on Big Scary Monsters.