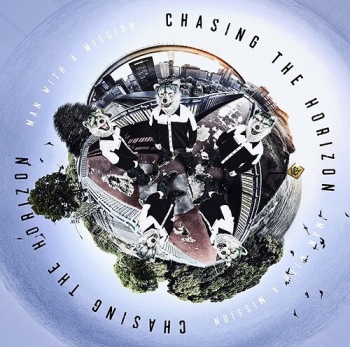 Ask anyone who’s had any sort of prior exposure to Man With A Mission what the first thing they associate with them is, and more likely than not, music will not be an answer. Rather, their biggest defining feature is their image of wearing wolf masks, fitting in with their backstory of the product of an attempt to create the “ultimate life form”. And straight away, that sparks all kinds of thoughts within a more cynical mind, like of a band giving themselves a gimmick to distract attention from music that isn’t up to snuff. Of course, a gimmick or an unconventional image doesn’t automatically mean a band is bad, and given that Man With A Mission are yet another stupidly massive act in their native Japan that the western world is yet to catch up on, surely there’s some kind of appeal there.

And sure, there’s bound to be something there, but between the erratic moment-to-moment shifts in their J-rock formula and how generally loud and overworked everything is, it’s difficult to pinpoint what Chasing The Horizon actually has. It’s honestly less to do with this album and more with J-rock as a whole, where any sort of musical cogency is put in second place to polishing and sharpening literally everything involved, but it’s not as if Man With A Mission are doing anything to offset that. It’s just as busy and as much of an oddity as anything else, and with the basis of the band’s sound being grounded in a Frankensteining of rap-rock, electronica, hard rock and pop-punk to name but a few, the messiness and obnoxiousness rarely – if ever – fades.

But, as is also the case with most J-rock, there’s an electricity and energy to Man With A Mission that, as almost cloyingly synthetic as it is, is near-impossible to avoid being swept up in. If there’s one thing that Chasing The Horizon does chief among anything else, it’s crafting a huge, sugared-up sense of effervescence that sounds like the most fun thing in the world, be that in the razor-tight dance-rock progressions of Dead End In Tokyo and Dog Days, or the slightly unhinged squawks of the horns courtesy of the Tokyo Ska Paradise Orchestra on the explosive Freak It!. It’s all pretty shallow below the surface all things considered, adhering to what could be presumed to be a more easily-digestible bent for western audiences, but depth isn’t really needed, not when Man With A Mission are almost constantly running at a hundred miles an hour, and when Tokyo Tanaka has one of the most expressive, distinctive voices of any Japanese act to make an international breakthrough in the last few years.

It’s just a shame that so much of that is overshadowed by the insistence to bring every musical element right to the front of the mix and blare it out to the point where any hint of texture or competent layering is blasted clean away. And to an extent, it mightn’t be worth criticising a band who go around wearing wolf masks for being overly loud and flashy, but when it detracts from Chasing The Horizon being a pretty enjoyable pop-rock album as severely as it does, it needs to be called out. It’s almost always the fault of the production as well, not only cramming everything together without even a sliver of breathing room, but lending such a sharp, tart quality to the electronics and proceeding to douse an even more acidic layer on top of that. It leads to instances like the borderline-chiptune synths of Hey Now and Take Me Under breaking out much more than they rightly should, or a track like Winding Road losing so much of its power-ballad elegance as it’s all crushed together. The single moment of real respite comes in the closer Sleepwalkers, a track that might follow the typical template of the J-rock ballad in its misty synths and overall steady, calm atmosphere, but it’s too little, too late when the rest of this hour-long album feels so overdone, striving to cram as much into every inch as possible in a vain attempt to maximise efficiency, when all it really does is lead to a splitting headache.

It didn’t have to be like this either; Man With A Mission have got solid enough melodic instincts to make a decent album without having to resort to overblown production tricks to try and get something to stick. In reality, all that’s done is make Chasing The Horizon come across as more unappealing than it should, and shaft Man With A Mission into the camp of bands who’ll undoubtedly garner notice through their gimmick above anything else. If that’s what they’re looking for though, they’re on the right track, especially when as much needs to be done with the music as it does.

For fans of: Zebrahead, Fact, One Ok Rock
Words by Luke Nuttall

‘Chasing The Horizon’ by Man With A Mission is released on 10th August on Century Media.