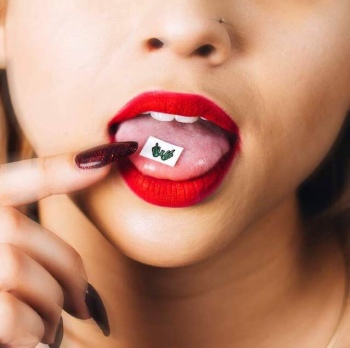 Quite a bit of context is needed to work out how Wilson arrived here. Their 2013 debut Full Blast Fuckery was easily one of the most underrated of that year, channeling the boozed-up southern hardcore of Every Time I Die to a ridiculously high standard that holds up even today. Even while its 2015 follow-up Right To Rise was a bit of a step down in going for a more straight-up hard rock vibe, the quick-wittedness that the band had become so synonymous with remained intact in what was a pretty fun listen all the same. But for the aforementioned context for how that all led to Tasty Nasty, the most that’s really out there was the band’s desire to make a hip-hop-influenced album, but even that doesn’t cover this bizarre juncture that’s ended up down the route of old-school pop-rock and cheesy ‘90s boybands.

Yes, the changes are blatant, and while it’s always good to advocate a band trying new things whenever possible, Tasty Nasty sees the Detroit quintet crossing the line on more than one occasion. It’s at least easy to see what Wilson are going for here by keeping up the levity that’s always been something of a calling card for them, and that’s fine; Tasty Nasty is about a deep as a paddling pool with a hole in it, and to criticise it for that would be to miss the point entirely. They’ve never been as cringeworthy as they are here, though, and that really does mitigate how much praise can be given. What’s worse is that it’s not exactly on an irregular basis either, with references to Wayne’s World and an attempt at a snippet of Wild Cherry’s Play That Funky Music on Summertime Treat (Tasty Nasty), Two Girls One Cup on House Of Fuckery, and Chad Nicefield’s generally poor collection of put-on voices on Spanish Coffee.

Whereas there’s always been something of a natural humour and charisma to Wilson, Tasty Nasty feels like its trying way too hard to hit a brand of comedy that ends up as little more than a pileup of pop culture references akin to late-season Family Guy. And for this sort of hedonistic, balls-to-the-wall party-rock, it’s just not needed, particularly when Wilson themselves prove in the first few songs that they’re more than capable of making solid, straightforward hard rock that doesn’t have to rely on forced humour. Dumptruck is easily the best song for some driving pace and groove that can actually match its hedonistic intentions, and while both Like A Baller and My Hustle are totally, unequivocally stupid, they show off Nicefield’s penchant for enormous personality and an over-the-top sense of coolness that he plays to his advantage.

It’s just a shame that Wilson seldom get the chance to show this off in any great capacity, as in striving for a greater sonic breadth, their choices of genre feel just as dated and brackish as the writing. It’s not always the case – the more standard hard rock tracks are fine overall (particularly for using hip-hop beats which so many bands can’t seem to get right), and the gooey funk of Money (Money Money Money) represents their most successful genre pivot – but at its worst, Tasty Nasty is really brought down to a significant degree. The Latin-flavoured pop-rock of Spanish Coffee and the Semisonic-esque radio-rock of Everyone Gets A Round On Me are awkward enough, but the album really hits its nadir with the pairing of Summertime Treat (Tasty Nasty) and Act My Age, the former being a country-pop / pop-rap hybrid with little substance to any of it, while the latter, with its weedy guitars, horns and turntable scratches, comes across like the cross between Len’s Steal My Sunshine and LFO’s Summer Girls that precisely no one wanted.

Again, while Wilson’s intentions of another straightforward party album can be admired, the execution feels botched beyond belief, to the point where any hopes of cohesion are completely dashed. It’s a shame it came out like this too; Wilson have always been a great band with an excellent sense of propulsion and fun, but Tasty Nasty feels like a colossal misstep where none of that really shines as much as it should. Even with the selection of cuts that are definitely passable, it’s all still a lot weaker than Wilson have been in the past, and for a band that could’ve done so much at their best, that’s a huge shame.

‘Tasty Nasty’ by Wilson is released on 24th August on Century Media.