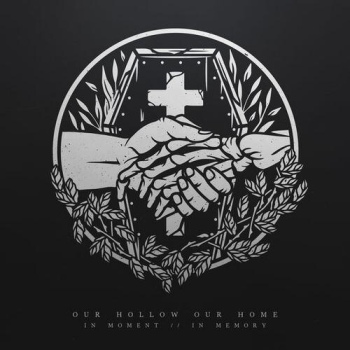 If there’s a band that deserves to rise up the ranks of UK metalcore more than any other, it’s Our Hollow, Our Home on the basis of simple work ethic alone. While past releases haven’t enormously impressed, the fact that this ostensibly new band already have their own label and annual all-dayer is more than enough reason to respect them, putting in the work in an environment in which that’s not a guarantee for success. But even then, all reports would suggest that new album In Moment // In Memory has gone a similar way, with Our Hollow, Our Home greatly expanding their sound and doubling down on the emotion fortitude following the death of vocalist / guitarist Tobias Young’s father from cancer.

And indeed, this is a much-improved outing in almost every sense, but mostly for the strength and power on display, both musically and thematically. It’s perhaps the latter that’s more impressive, structuring the album around the five stages of grief and flowing from there. There’s a stormy, bleeding-hearted force on a track like In Moment that paints Young’s grief in stark fashion, but following feelings of curdling hopelessness and frustration on Love Loss and the imminent dissolution of other relationships on Weight & Carriage, the light shows itself at last on Parting Gift, Young’s reaching of acceptance where the dark clouds are yet to clear, but they aren’t as suffocating as they once were. It’s a very human narrative that UK metalcore bands frequently do much better than their US counterparts, but with Our Hollow, Our Home, the grief is much more tangible and lived-in, and thus more gripping.

As for the execution, it’s not quite up to that level, purely because a lot of this does feel familiar, particularly when Bury Tomorrow released Black Flame earlier this year and pretty much perfected that formula on it. Granted, it’d be impractical to expect In Moment // In Memory to reach the same caliber, particularly when Our Hollow, Our Home are far less experienced, but for what they do here, it’s made abundantly clear that this is great improvement. Bury Tomorrow’s savage guitar tone has been co-opted in pretty much the best way possible with how thunderous tracks like Wraiths and Speak Of Sorrow, and Connor Hallisey have possibly the most muscular, powerful scream of any up-and-coming metalcore vocalist. The effort that’s gone into this album is blatant, and the abundance of fairly perfunctory (yet kind of understandable) interludes aside, every contrasting bit of heaviness and necessary melody feels excellently integrated. Topped off with production that isn’t too intrusive and cleaner passages that still have weight, and this feels just about perfect for a metalcore formula waiting to be built on.

That’s pretty much the only thing holding Our Hollow, Our Home back at this stage, and while the fact they’re yet to fully move on from their influences isn’t deal-breaking at this stage, it’s something that they’ll have to do before long to continue on this upswing. Because, make no mistake, this is a definite improvement almost across the board as a far more instrumentally and thematically robust listen. It mightn’t be perfect or groundbreaking just yet, but for a band who’ve undergone a metamorphosis to this extent, it’s more than enough.

For fans of: Bury Tomorrow, While She Sleeps, Miss May
Words by Luke Nuttall

‘In Moment // In Memory’ by Our Hollow, Our Home is released on 19th October on //Hollow Music.