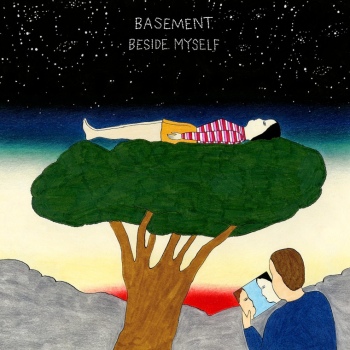 While Basement’s second wind since returning from hiatus in 2014 has brought them to so many more people than ever before, it’s also come from tightening and refining their sound, moving from the grunge- and shoegaze-soaked emo of albums like Colourmeinkindness (widely accepted among fans as their best album) to alt-rock that definitely has emo elements, but has remained far more straightforward. However, the best thing about this is how natural it’s all felt; yes, Promise Everything was a more accessible listen, but that was never at the expense of depth, nor did it feel like a cynical move to curry favour with a wider audience. From it, Basement have continued to flourish and hit heights that seldom would have been possible before, all while remaining staunchly true to themselves. With Beside Myself though, there’s an elephant in the room called Fueled By Ramen, and even though the singles leading up to this album’s release haven’t shown anything too egregious, the way the label has previously run its acts into the ground means that anything could happen here, and that Basement would come out as the greatest casualties if they did.

Thankfully, that’s not the case; Beside Myself feels like a distinctly uncompromised listen, but one that’s not without issues that, unfortunately, feel like Basement not rising up to their full potential. It certainly sounds nice all the way through, but also inconsequential, as if this is a safer placeholder album to test the waters for what their new, notoriously restrictive home will allow. Granted, Basement have never provided the greatest thrills, but more than ever, Beside Myself is coasting by with less urgency and presence than they can really get away with. Individually, the likes of Be Here Now and New Coast really benefit from Basement’s leaning towards straight-up rock and the crystal-clear production that’s been offered to them (in terms of fluidity and flawless clarity, the whole album really excels here), but as a body of work, these songs can really start to run together, serving more as pleasant background experience in its generally mid-paced nature and Andrew Fisher’s serene vocals that don’t particularly ring as having a lot of expressiveness.

None of this is particularly bad, mind, and the fact that Basement are so easy to fall away from anything too harsh at least shows a thematic consistency that stands head and shoulders above anything else here, showing the distance that Fisher feels as he sinks into his own mind on Disconnect and Stigmata, and how much that’s exacerbated by the world around him, from an unrequited love on Keepsake to the Westminster Bridge terror attack in 2017 on Ultraviolet. What resonates even more is how its all written, primarily with very simple semantic fields and short verses, acting as the final, underlined sigh for hopelessness that Fisher is wading through that could very likely consume him entirely. It’s powerful stuff and certainly works with the muted execution, if only justifying it slightly more.

And really, it would be nicer if Basement could go further in that regard, either pushing that disconnect to its absolute limit or making this a more bracing, distinctive listen than it already is. It’s a shame that Beside Myself is neither of those things as well, as there’s a brilliantly rich, melodic core that Basement are so close to fully tapping into that’s not being used to its full potential. It’s definitely possible to see why some would absolutely love this album, but Beside Myself underplays too often to make the profound impact that it definitely could.

For fans of: Citizen, Turnover, Have Mercy
Words by Luke Nuttall

‘Beside Myself’ by Basement is out now on Fueled By Ramen.