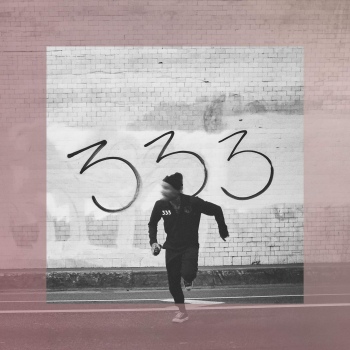 Just like the socio-political world they find themselves immersed in and subsequently look to eviscerate from the inside out, there’s no standing in one place for Fever 333. Between their original reveal and first live show at a donut shop in 2017 to the surprise release of their Made An America EP last year, conventionality seems to have been given a swift kick out the window, par for the course for a band led by former letlive. maverick Jason Butler and branding themselves as more of a movement than a band. And here’s the thing – coming from anyone else, that could easily be dismissed as self-important grandstanding with no chance of being made good on, but Butler’s hardline outspokenness, love of classic hip-hop and credentials of fronting the most exciting band in the world (while they were around) all culminate in a way that makes it totally believable. And thus, with the symbolic dropping of the ‘The’ in their name as they move to their next phase, Strength In Numb333rs arrives under the crushing weight of expectations and speculation, not only surrounding such bold claims regarding its overall magnitude, but what sort of new creative force the move between letlive. and here has birthed.

In a way though, a lot of what Fever 333 bring to the table here feels completely at odds with everything letlive. had, and that feels like the point. Since their inception Fever 333 have stressed they’re a movement rather than a band, and Strength In Numb333rs seemingly provides the strongest evidence and explanation for that yet, condensing each element down to its sharpest minimum – the language; the instrumental pallet; the overall execution – for something a lot tighter, but also facing directly at those it wants to affect the most. It’s a ballsy move for sure, cutting away so much of the literacy and intrepidness of Butler’s previous band, but for the most part, the results are stellar. Any trepidation surrounding how a project like this might go has been completely swept away; Strength In Numb333rs really does feel like a rebirth in the most visceral way possible.

But even so, it still might leave some letlive. fans disappointed at first; compared to the depth and layered metaphors that Butler had previously brought in spades, this sort of straight-from-the-gut, political fire-spitting can seem comparatively basic. But even then, with Butler playing activist over frontman here, there are layers that make his contributions connect so much deeper here. It’s most pertinent in the emphasised inclusiveness that runs through the album, and while the heavy focus on rallying against police shootings and the prejudice that continues to blight black Americans (as well as comparing himself to influential black figures like Malcolm X and Muhammad Ali on Burn It to really hammer home his stance), a track like Coup d’Étalk’s notions of “all power to all people” feels like the call for a primarily white audience to fight for what’s right alongside him. And with Inglewood/3, where he talks about growing up as a mixed-race kid and being alienated from both black and white communities, but still deeply entrenched in the vicious cycle of prejudice and violence, it’s almost catalytic for how vital this album sounds, striving for rebellion and putting the call out as wide as it can go.

It’s definitely blunt, but again, it’s meant to be, and it’s all executed in a way to complement this rather than highlight it. At their core, Fever 333 do feel like a decidedly mainstream proposition, taking the big, clean post-hardcore riffage of the Warped Tour crowd to fashion into their own decidedly distinct fashion. And it’s that distinction that ultimately keeps Strength In Numb333rs afloat, with the jagged shards of electronic noise and almost metallic hip-hop beats to puncture what could’ve been a too-perfect exterior. On the whole, it feels like a big-league, well-produced rock album, but contorted and corrupted in a way to keep it on that street level, especially with Butler serving as the impassioned mouthpiece with the vein-bulging screams that not only feel like the most appropriate vehicle for ire in this vein, but also sound crucially natural. Tracks like Prey For Me/3 and Out Of Control/3 tow the line between post-hardcore accessibility and riotous protest-anthem almost flawlessly, something this album gets even more mileage out of through the extended codas of some tracks, devolving into manic electro-punk screamers that see Butler put at the top of his game in terms of true bloody-minded rage and vitriol. Admittedly this isn’t always the case – for as well-written as it is, Inglewood/3’s opting for pensive hip-hop balladry can feel a bit misguided in the album’s wider context – but overall, Strength In Numb333rs manages to keep an incredibly powerful balance between emotion, desire and fire in check virtually across the board.

Not that that should be any sort of surprise, though. Jason Butler is one of the few artists in modern rock who can truly be called a visionary, and Fever 333 only adds another string to his bow in terms of creating and fuelling that vision. It mightn’t be as dense or layered as any of his letlive. work, but Strength In Numb333rs feels equally necessary in the modern rock conversation, serving as not only one of the few true protest albums to be released in recent times, but also as a fantastic example of rock done right. For all the empty statements and chest-puffing made about raw, personal music, this is head and shoulders above all of them without even trying, and for Fever 333, it’s done enough to put them amongst the most exciting and worthwhile new bands around.

For fans of: Linkin Park, Rage Against The Machine, Beartooth
Words by Luke Nuttall

‘Strength In Numb333rs’ by Fever 333 is out now on Roadrunner Records.