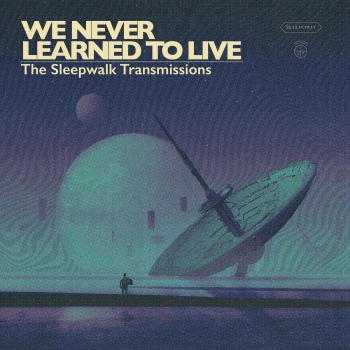 The reintroduction of We Never Learned To Live with The Sleepwalk Transmissions feels strange, and not because of how overdue it is. It definitely is overdue given that Silently, I Threw Them Skywards was released in 2015 with not much else since, but they never really stood out as a band who’d springboard off of something like that to the adulation they’re currently receiving. As understandably well-received as it was, that album in hindsight never really seemed like one that would break out from its own scene, and given the heavy emphasis that post-hardcore took on larger-scale atmosphere and a deeper, interweaving narrative a couple of years ago, one could assume that We Never Learned To Live would’ve taken their opportunity for a second strike then. Granted, the vastly increased clout of Holy Roar nowadays means there’s never been a better time to release something on that label, and the dedication to craft that’s always felt present in this band’s work has undoubtedly played a part in the four-year gap between releases, especially when The Sleepwalk Transmissions operates as a concept album for human isolation in the modern world through the medium of sci-fi short stories.

Going off their previous work, this all seems right in We Never Learned To Live’s wheelhouse; they’ve always been good at giving these sort of weighty, heady concepts an articulate execution that’s able to match their scope and magnitude, and The Sleepwalk Transmissions is really no different. On the whole, this is a rather natural next step for this band to take, but for the mountains of praise it’s been showered in up to now, it doesn’t quite reach that level. This is certainly a solid album in its approach to intelligent post-hardcore, but the sense of lucidity that feels like the overall baseline doesn’t connect enough for this to be great, and for all the ideas that We Never Learned To Live have, to see them struggle to coalesce in such a consistent way does feel slightly underwhelming.

It’s not like the band aren’t trying either, especially when the individual pieces are clearly there. They’ve nailed the formation between clean, expansive melody before a vertical drop into angular discord like on Wounds Like Wires, and at its best, there’s a sense of near-seamless modulation and fluidity, particularly in the back half, that can take this album so far. As clichéd as it may sound, this is an album that feels like a journey, and when so much of the source material is rooted in sci-fi, channelling such an oppressive airlessness like on Luma / Non Luma really does have a lot of weight to it. It’s a similar case with the vocals as well, as Seán Mahon has plenty of room to breathe with strident (if a bit un-nuanced) cleans that effortlessly bleed both into much-appreciated passages of screams, and into the heavier walls of sound like on the closer Radio Silence. And yet, while that might all sound fine, the slower, more deliberate pacing on this album can lead to this all feeling rather one-note and dragging, unfortunately muting a lot of the impact that such a grand, open-ended swell can have. Unfortunately, the lyrics aren’t much better either, as a lot of the sci-fi framing feels cursory at best in a way that can drain some of the flair from when ends up as a rather standard cathartic vehicle in the vein of so much other post-hardcore over the last few years. It’s hardly coincidental that a track like Android Anaesthetist ends up standing so much stronger when it engages with its theme more explicitly, and yet, while the intentions are still pretty clear, the looser, less involved execution doesn’t culminate in as satisfying a manner overall.

What’s even more frustrating is that it’s so easy to see where those were going with this album, but even though there’s enough quality in the ambition and core musicianship to keep this as a solid listen, there’s still the distinct feeling that We Never Learned To Live could’ve gotten a lot more out of this album. There’s no doubt that they could be a welcome addition to the crop of cerebral post-hardcore mainstays if they could just tighten up their ideas a bit, and The Sleepwalk Transmissions shows the realistic cap of where they can end up when they don’t. It’s definitely worth a listen to try and formulate the roadmap of better things in the future, but it’s tough to say that they’ve really gotten there in any great capacity this time.

‘The Sleepwalk Transmissions’ by We Never Learned To Live is out now on Holy Roar Records.