As much as not judging a book by its cover is a totally relevant way of approaching music, an album called Tequila Island doesn’t exactly give the impression of much […] 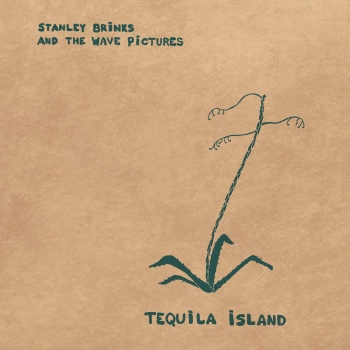 As much as not judging a book by its cover is a totally relevant way of approaching music, an album called Tequila Island doesn’t exactly give the impression of much depth. Indeed, the background of it all feels a lot more fleshed-out, being the fifth collaborative album from Stanley Brinks, the sobriquet of André Herman Düne of French folk-rockers Herman Düne, and Leicestershire indie-rock band The Wave Pictures. The reputation that both acts have for being enormously prolific is one that underscores this album rather forcefully – since their last teamup in 2015, The Wave Pictures have released five albums while Brinks has released seven – and given the general easygoing nature of both its title and its artwork, Tequila Island looks to be lowering any stakes that might have been formed through a very militant release schedule, keeping things light and breezy to ease in its early summer release date.

Judged on those merits then, Tequila Island feels as though it can go a number of ways, as Brinks and The Wave Pictures pair detailed yet understated indie-folk weedling with the horizontal, alcohol-soaked relaxation that this sort of yacht-rock is often characterised by. Kudos for even attempting to give this sound any sort of dimensionality then, but the changes do feel little more than superficial overall, deviating from picturesque Caribbean beaches into a Benidorm resort for a similar overall effect, but with a lot of the grime and budget imperfections left in. It makes for something of a different listen, and that can be respected, but when it comes to the overall appeal that this deliberated small-scale genre has, Tequila Island doesn’t quite hit all the marks.

It’s slightly difficult to fully explain why as well, but it largely comes down to a sense of tone. The general instrumental foundation remains solid overall, driven by warm acoustic guitars that stick almost exclusively to simple melodies, but find a way to use them well in the lilting shuffle of Like A Fool and the title track, or the quicker-stepping dalliance into country on Like A Song. It’s all very tastefully produced as well, keeping everything relatively quiet and low-key, but simultaneously highlighting the pockets of detail that brings a nice sharpness and crispness to it all. The problem, however, comes with everything placed in front of all that, starting with Brinks himself. He’s definitely got a unique voice that, when touching on something more playful like with Sober In Barcelona, brings plenty of character, but there’s also an undertone of sleaziness that really doesn’t mix well with everything around it. In the wider context of the yacht-rock holiday resort, he’s the patron who’s had a bit too much to drink to the point where a scene is just on the verge of being caught, and it can lead to the staggered, occasionally off-time progressions of Living Without You feeling unnecessarily gauche, or the swampy saxophone line against the already-darker strums of Vermut having a nice sense of depth, but feeling totally at odds with the intended tone. It’s hard for any of it to really bounce back either, especially given the lack of anything significant buffers thanks to instrumentation and production that’s deliberately thin and close, and lyrics that barely elevate above lackadaisical relationships and copious amounts of alcohol. Of course, this is nothing new for a sound like this, but Brinks and The Wave Pictures’ attempts to rectify these shortcomings don’t amount to much themselves, and it leads to an album that can certainly feel forgettable, particularly towards the end, but more than that, feels stuck in a predetermined cycle of refusing to work regardless of what changes are made.

Then again, that’s clearly not a demotivating factor given that they’ve been around this particular block numerous times before, but it’s difficult overall to feel any strong feelings one way or another towards it. As a fairly light and innocuous listen, Tequila Island can certainly fill a hole, but for advancing the genre or taking it in down interesting new routes, this doesn’t do a whole lot. The fact they’ve tried is appreciated, and there’s still a handful of moments with enough to like to prevent this from being a total failure, but summer albums with more style and substance than this are out there in droves, and that ultimately leaves Brinks and The Wave Pictures’ efforts out in the cold.

‘Tequila Island’ by Stanley Brinks & The Wave Pictures is released on 21st June on Fika Recordings.