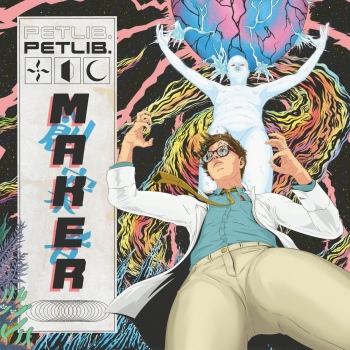 As far as career trajectories go, Petlib.’s might be one of the more diffuse to emerge in some time. What began as the emo duo Pet Library has subsequently evolved into something a lot wider-reaching, ditching pretty much everything about that sound for a more expansive, off-kilter mesh of post-rock and post-hardcore trading glances with math-rock and electronica. It’s the sort of drastic overhaul that feels indicative of a band looking to do much more than what they already have, and Maker does indeed feel like a product fitting of those assertions, wrapped in deeper, more allegory-driven concepts that’s rooted in their diverse instrumental palette.

And it’s to Petlib.’s immense credit that Maker does feel like a creatively fertile listen, with the band sampling various styles and sounds across a surprisingly compact canvas in a way that hangs between holding their own genre boundaries together, and sliding into more outwardly experimental territory. But with the constructive ethos of the former and the more tenuous sonic delineations of the latter, Maker becomes an unfortunately fragmented album, and one that frequently feels confused about what it should be and what it needs to offer. Technicality can still count for a lot here, and while that’s a fairly heft boon for Petlib. pretty much across the board, there’s a handful of niggling issues refusing to click that leaves Maker a fair bit weaker than it should be.

It’s conceptually where Maker shines more than anything after all, as Petlib. craft a narrative surrounding a scientist creating a utopian universe in their own mind within which they can detach themselves from reality to become a godlike figure, and subsequently becomes obsessed with power which sees both realities deteriorate and decay. It’s a compelling concept, and serving as a parallel to corruption and waning morality within figures in the real world gives it an edge almost akin to classic sci-fi in its veiled yet direct and understandable criticisms. Even in terms of sonic progressions, the chaos embodied in the likes of Shell’s erratic, low-slung hardcore and Disintegrate’s grinding electronics comes crashing down with the solemn, overcast Tyrant and the sober conclusion in the title track. On top of that, there’s a great command of production modulation that only adds to each necessary mood; guitars and pianos can have a sad ache to them when needed, but can still sharpen themselves up for erratic passages like on Reflection that carry dread and portent with minimal hassle. For an album navigating around so many styles, Maker frequently has the necessary means to make them connect, regardless of where each track lands.

The real issue, though, comes with the album as a whole, in that for all of their creative impulses and intentions that they’re more than happy to indulge in, Petlib. don’t seem to have a way of bringing everything together as one piece of work, and it makes for an album that’s fragmented and bitty at every possible instance where that could be a problem. For one, keeping the majority of tracks below the three-minute mark feels like a vast oversight, as each different sound isn’t given the necessary room to evolve beyond the gated segment that Petlib. show. It feels most egregious on Return with a stop-start progression that annihilates any sort of cohesive flow, but especially when new ideas are piled on as the album goes along, what’s left starts to feel less progressive and experimental, and more like a band struggling to find a suitable way to relay their vision, so they just do it as best as they can. It only really clicks with Tyrant and the title track, as both run significantly longer to allow themselves to morph and grow in a more natural, breathing fashion. The rest of Maker doesn’t have that, and it finds difficulty sticking the landing because of it.

Therefore, where Maker definitely has the ideas under its belt, an awkward, often undeveloped execution can leave it falling short overall, especially when something like this needs the space to grow that Petlib. simply don’t provide. That’s not to say it’s worthless, and the concepts and ideas alone have a lot of turns that are undoubtedly worth exploring, but they feel a noticeable degree away from being fully realised, and the difference that can make is stark when comparing this album to a similarly progressive, narrative-driven effort that entirely connects. For an early first step, Maker is definitely admirable, but the feeling that it should be more is unavoidable, and trying to overlook it can be even more difficult.

For fans of: Deafheaven, Pianos Become The Teeth, Explosions In The Sky
Words by Luke Nuttall

‘Maker’ by Petlib. is released on 9th August on Beth Shalom Records.