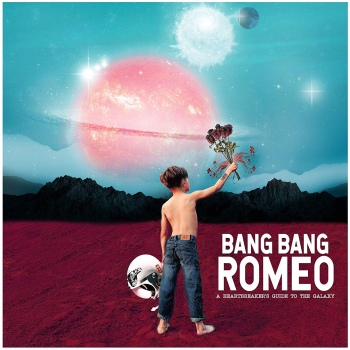 It’s always interesting to see where the sources of hype for a new band are, and how they can be seen to dictate where that band ends up in their music. For Doncaster’s Bang Bang Romeo, they might have started out on the indie circuit rubbing shoulders with future household names like Blossoms, but their biggest boost has undoubtedly come recently in a move to the pop world, bagging an opening slot for Pink on her recent European tour and picking up a feature from Example on a track from this debut full-length. And to be honest, pop has always felt like a more comfortable ecosystem for Bang Bang Romeo to live in; vocalist Anastasia Walker has always had a fantastic voice indebted more heavily to classic soul than anything in rock or its adjacent worlds, and the band’s strident advocacy for LGBTQ+ rights and body positivity has often found a greater boon in the naturally wider reach that pop has. Thus, with a debut as long-awaited as A Heartbreaker’s Guide To The Galaxy has been (some of the songs on here date as far back as 2016), the time couldn’t feel more right for Bang Bang Romeo to properly establish themselves as a world-beating mainstream band, especially given the incredible amounts of traction they’ve picked up only relatively recently.

It’s pretty apparent that this album is pretty fixated on capitalising on that as well, as Bang Bang Romeo’s primary game plan seems to be to collate their biggest, most radio-ready songs into a single package ready to be snaffled up by the masses post-haste. And looking at the results, that’s not a bad way to go about things, especially when A Heartbreaker’s Guide To The Galaxy does ultimately stick the landing in terms of the sheer volume of indie-pop-rock hits. Not everything sticks (as is to be expected from an album with a piecemeal constructive process like this one’s), but there’s a fair amount of character and likability here, and in terms of getting a formidable chokehold on both the pop and indie scenes, it’s not too much of a stretch to imagine Bang Bang Romeo doing that with this album.

And it’s not like the tantalising mainstream promise has completed sanded down this album to nothingness either; there’s a very clear rock core that manages to shine through, and even among the smooth, bombastic production, you can tell there’s a fire within Bang Bang Romeo that’s keeping the ties to their roots firmly attached. Walker is the obvious tether between the two, as a tremendous vocalist with a consistently outsized performance that’s always enough to take these songs over the top, but the big, arena-rock stylings of various origins are really where both Bang Bang Romeo’s drive and accessibility are formed around. There’s no denying that the blatant Springsteen aping of Cemetery or the juddering electro-rock of You & I have crossover potential plastered over every inch of them, but that’s not at the expense of their rock credentials. Calling it ‘alternative’ might be a stretch (though when has that ever stopped anyone?), but the parallels are much easier to draw between Bang Bang Romeo and classic rock or ‘90s Britrock, where that focus on size is placed right at the fore to simply distract from a very simple compositional formula. And it can’t be said that it doesn’t work well either, especially in the more classic-leaning smokiness of Shame On You and Bag Of Bones (something that makes the comparisons to Kesha’s Woman in the latter feel all the more prescient), or the sharper, more abrasive electronics that cut through You Scared The Love Out Of Me.

It’s part of what makes it easy to appreciate A Heartbreaker’s Guide To The Universe as a collection of singles rather than a full album; there’s no real connective tissue between these songs, and when those individual moments shine as brightly as they do, it’s a lot simpler to pick out where things begin to slack. At fifteen tracks, it’s definitely longer than it needs to be, and when most of the weaker moments feel concentrated towards the end, it does feel like more of a crawl to reach the finish line than it really should. It’s mostly a case of forgettability at that, with the likes of Over My Dead Body and Natural Born Astronaut falling into pretty rote moulds for both neo-soul and indie-pop respectively, and the Example collaboration Love Yourself rooted in a pithy, Ed Sheeran-esque acoustic rollick that’s just as flavourless. Granted, a little more grit wouldn’t go amiss on the whole to complement a pretty formidable sound in terms of volume alone, but Bang Bang Romeo’s biggest weakness comes in a relative lack of quality control, and how pruning back some of the less impactful moments here could do a lot more for them.

It’s especially the case when looking at how direct they want to be, and how that’s ultimately preventing them from doing it as much as they want to. Again, taken as a collection of singles, there’s actually a good deal of A Heartbreaker’s Guide To The Galaxy that fully nails the pop songwriting template while still managing to have some heart and introspection behind it. It’s far from a deep emotional purge, but there’s definite dimensionality here, with Walker examining her own process on returning to unhealthy relationships on Shame On You and how her own insecurities affect how she views her partners on Adore Me, or taking on a more defiantly self-positive or empowered role on Bag Of Bones and Invitation respectively. On top of that, Bang Bang Romeo clearly know their way around a handful of monster hooks, and even if there’s not that one omnipresent earworm that’ll inevitably see them shoot even higher, they’re already not far off it, and it’s not like a fair number of these tracks would be out of place on daytime radio already.

It all makes for a band who might still be teething as far as their experience of becoming a big pop prospect goes, but they’ve got the confidence and ability to break out of that very soon. A Heartbreaker’s Guide To The Galaxy might be like kryptonite to a more invested rock fan, but for something so plainly planted in the mainstream world and looking to flourish there, Bang Bang Romeo are doing a lot right. The hooks are soaring; the execution has style and flair without being devoid of substance; and there’s enough versatility to move in some pretty interesting directions going forward. Tightening up their approach is the next hurdle to clear, but that’s the sort of thing that comes naturally in time; even right now, it looks as though Bang Bang Romeo might just be here to stick around.

‘A Heartbreaker’s Guide To The Galaxy’ by Bang Bang Romeo is out now on Five Seven Label Group.