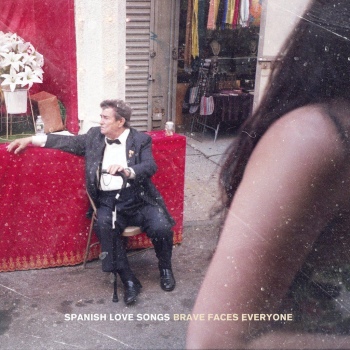 When Spanish Love Songs came and stopped everyone dead in their tracks with their 2018 album Schmaltz, it was a truly flooring moment. In the midst of the renaissance of heartfelt, human punk that was seeing bands like The Menzingers reach their artistic peak and The Wonder Years morphing into giants of the genre, this then-little-known band was delivering one of the best examples of the sound that the scene had delivered up to that point, to where Spanish Love Songs have now become one of the standard bearers of quality for what exciting, upcoming rock music should sound like. More so than that though, if history has taught us anything with bands like this from the leap that The Menzingers pulled off with After The Party, it’s that hype can be the driving force needed for this branch of punk to deliver some astounding things. Their recent signing to Pure Noise has already set the wheels in motion for Spanish Love Songs to reach that peak, and a new album like Brave Faces Everyone is ready and raring to nail that turning point down for good.

And even without all of that, it’s not like this album was going to be anything less than great; with both Schmaltz and their prior work, Spanish Love Songs have maintained a constantly impressive watermark that doesn’t look to be broken anytime soon. But Brave Faces Everyone seems to vault over even that, to where genuinely untouchable territory is within arm’s length, if not landed in altogether. In the same way that After The Party became that benchmark album that each subsequent release in the scene would be placed and compared against, the same can now be said of Brave Faces Everyone, but perhaps more impressively given how Spanish Love Songs fill a completely different niche to The Menzingers, but one that’s still brimming with rousing anthemia and some absolutely beautiful writing. This is the sort of release that’s on a direct course for plenty of best of 2020 lists, and considering how early in the year it still is, it speaks volumes about how phenomenal this really is.

And like so many albums in its vein, it’s that writing that forms that majority of Brave Faces Everyone’s punch, but Spanish Love Songs have a knack for going so much deeper into the bedrock of millennial angst for something that really cuts, as frontman Dylan Slocum finds himself in the same liminal existence as so many others his age, where the commodification and weaponisation of disenfranchisement, depression and fear has turned any form of happiness into some perceived facade. There’s not a performative or insincere word across this entire album, partly down to how Slocum’s vocals regularly quiver and buckle under the weight of his own emotion, but also because each line hits with so much gumption and power. There’s a level of brutal detail that makes even the more generalised songs like Generation Loss cut deep, but when that’s fed through into lyrical flourishes that draw on how the culture of fear has become part of daily life on Beach Front Property, or in the heartbreaking refrain of “My bleak mind says it’s cheaper just to die” on Losers, the dark, destitute mindset that this perspective comes from becomes all the more palpable. For as unashamedly enormous as every track on this album is, Spanish Love Songs never lose sight of their vision, nor do they ever feel as though they’re retreading ground because they have to. There’s a naturalism to this album, where the catharsis feels genuine and the impact is constant.

Of course, the fact that Brave Faces Everyone does sound as huge as it does can play a pretty big role in how that impact lands, as Spanish Love Songs take the usual combination of gruff hooks and crowdpleasing enormity that punk of this stripe is built on and sends it right to the stratosphere in a package that never lets up. The rawness of the production and a formidable guitar and bass tone match the tension in the writing excellently, and the extra pinch of swell from Meredith Van Woert’s keyboards serve as a natural chaser to enhance the scope of it all. As has often become the case, simplicity is this album’s greatest strength, and funnelled into galloping punk ragers like Kick or the teeth-gritting emo of Optimism (As A Radical Life Choice) yield the best possible results. It’s hard to call this a tight album given how important is core of reverberating uncertainty is, but Spanish Love Songs barely waste a single second among it. It’s flooring stuff, and the fact there’s nothing even close to a bad track here keeps the whole listening experience feeling as fulfilling as possible.

It wouldn’t be a stretch to say that Spanish Love Songs have surpassed all within their field, setting the new standards going forward and continually nudging the bar to impressive, borderline impossible heights. It might sound like an exaggeration, especially with how amazing music has come out of this scene in particular, but Brave Faces Everyone genuinely feels like the boldest culmination of this sound to date, bearing its brutal honestly and incredible ear for a melody in a way that never falters even once. More importantly though, it’s the sort of album that’s an easy inroad into the wider conversation of modern rock, enough to put Spanish Love Songs in the top tier of modern bands and keep them around for a long time to come. There’s no doubt that they’ll be able to keep this momentum either; if anything, they’re only getting better with each release, and trying to top this one is going to be the sort of challenge that’ll be thrilling to attempt, and even more so to hear.

For fans of: The Menzingers, The Wonder Years, Nervus
Words by Luke Nuttall

‘Brave Faces Everyone’ by Spanish Love Songs is released on 7th February on Pure Noise Records.