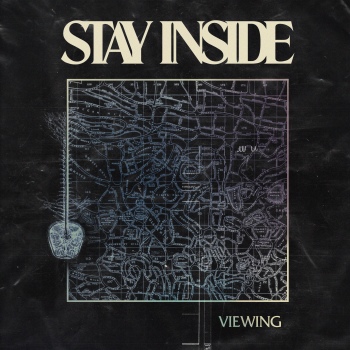 That’s certainly an apt band name for right now, but Stay Inside have been doing the rounds for a while longer than simply breaking out because of their serendipitous moniker. They’ve actually been going since 2016, with a couple of EPs holding on to the sort of literate, emo-shaded post-hardcore of bands like La Dispute or Touché Amoré, a circle whose already abundant quality and famously enclosed nature can make it difficult to break into as an ostensibly new act. Still, immediate credit needs to go to Stay Inside for the effort, especially now with a solidified lineup and a home on No Sleep that, when it comes to creating a decent platform for similarly-sounding emo acts, tends to be a safe bet upon where to build a launchpad from. Even with the relative quietness around debut full-length Viewing (though that’s probably more to do with this being a new band and less with it’s quality), there’s already a lot about Stay Inside that suggests some fairly significant step being made, at the very least to wedge a slot in modern emo and post-hardcore’s mid-tier.

That already feels rather close as well, but Viewing still wears its status as a debut on its sleeve with a lack of refinement that’s holding Stay Inside back from hitting that level at the minute. It can be difficult to chastise them too harshly for that, but the issues are still notable, and when they can be compounded into an album that shows very real promise but doesn’t quite hit a spot where that can be best utilised, and the overall results that aren’t quite as gripping as what the rest of this scene can produce do reflect that.

But even within that, the reason that Stay Inside can’t really be spoke about too critically is that they’ve effectively completed their inroads into the scene in terms of sound and execution. Furthermore, the inclusion of both male and female vocals from dual vocalists Chris Lawless and Bryn Nieboer already nails down a unique dynamic, especially in different lyrical passages and delivery styles overlaid with each other on tracks like Void and Veil to forge a sense of entrapment and claustrophobia in a fresh, effective way. It lends a bit more punch to the writing for one, taking rather abstract projections of topics like death, grief and regret and making the edges more jagged and tense in similar ways that a band like La Dispute might employ. It’s actually a rather tight balance that Stay Inside are holding, with a recognisable genre field being propped up by techniques that, while hitting the same result overall, get their in a more interesting way. It lends a bit of variety to Viewing overall; a track like Revisionist might fall into the usual emo headspace in Lawless’ very insular, underplayed delivery, but between his own screams and the contributions of Nieboer on Monuments or Leave that lend more diversity to the vocal register, it’s a tad more refreshing to hear on the whole.

It’s just a shame that a lot of that inspiration doesn’t sink down to the instrumentation or production, the area that’s most likely the be the cause of Stay Inside simply being slotted into the usual lineup with very little exception. Again, it’s not like it’s bad, but when the gradual contortion into a more angular noise-rock template on Veil is really the only moment that stands out all that much, it can feel like the same amount of work that made the front of the band stand out hasn’t been applied to nearly the same amount here. And upon deeper examination, that’s an issue that’s probably the most endemic within Viewing; when the extremes of this sound fall into either brazen experimentalism or throat-shredding emotional catharsis, falling in between the two doesn’t do all that much, and without much in the way of hooks, there’s a distinctly mid-level feel to Viewing that feels about right but not completely satisfactory. There’s still an inherent appeal about the echoing, distant guitars that can burst into something more terse and forceful on a track like Silt, but currently, it doesn’t go far enough to place Stay Inside into that higher tier of bands that can do more with that sound and make a more tangible impact.

However, the implication that that’s possible is more apparent here than with many bands of their stripe, simply because it’s really only a matter of time before the unique core of Stay Inside branches out to affect them as a whole. Viewing might be, in itself, a decent if slightly unremarkable foray into emo and post-hardcore, but there’s clearly a lot more for this band to offer that’ll undoubtedly make a far greater impact when it’s unleashed. Right now though, there’s definitely a hint of playing it safe with Viewing, getting down a stable base formula as a first attempt rather than putting down everything they’ve got right off the back. It’s a smart move in reality, and even if the results mightn’t quite be as great as they could be, the fact that hope remains present regardless is enough of a reason to pay attention to whatever Stay Inside do next.

‘Viewing’ by Stay Inside is released on 10th April on No Sleep Records.