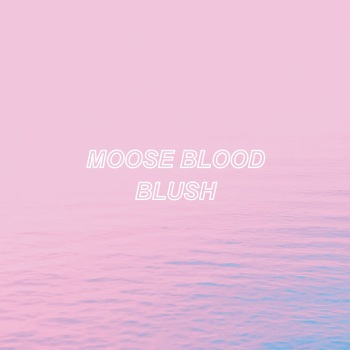 At the turn of the decade, British rock’s main commodities consisted of widescreen, polished alt-rock, bands that were mostly good but could feel very sterile when compared to acts that had even the slightest ragged edge. That’s why the changes that have undergone since the end of 2015 have largely been for the better, seeing bands with more flavour and personality like Creeper and Milk Teeth thrive just outside of a mainstream setting. And leading the charge are Moose Blood, the unassuming Canterbury quartet who’ve risen to their lofty standing in a brilliantly grassroots way, through militant touring and the strength of their 2014 debut I’ll Keep You In Mind, From Time To Time. That’s not to mention that they’ve almost singlehandedly made emo a sellable commodity in 2016, with their poppier, richer take on the genre. Such strength has made way for the real challenge of continuing the same momentum with their sophomore effort Blush, an album which is understandably amongst the most anticipated releases of the year for a good number of people.

And of course, Moose Blood have managed to pull through because Blush is undoubtedly a success, warm and lush while still dripping with passion and melody. Though this could’ve been predicted from the off with the two preview singles Honey and Knuckles, the former being the best song of the year so far, and the latter being a direct contender for the second best. And while this album has all the mainstream-baiting capabilities of any other melodic, British band (honestly, the vast majority of these songs could be on regular rotation on Radio 1), the slightly sandier presentation feels a bit more real, and Eddy Brewerton’s hangdog vocal persona has more character than A. N. Other Britrock singer.

But the capacity in which Blush succeeds depends on the definition of ‘success’ you’re using. In terms of a bid for mainstream acceptance, it passes with flying colours – a bit smoother than their debut with plenty of big choruses and earworm hooks to latch onto. But compared to the band’s debut, Blush really feels like a couple of steps backwards, and that’s almost entirely the fault of the production. Where its predecessor was rough and ready, Blush sparkles and shimmers, and it makes these songs feel emptier by comparison. Take Spring for example, a track that draws direct parallels with fan favourite Cherry in its stripped-back guitar-and-vocals dynamic. Cherry‘s poignancy was amplified by its imperfections, like its rumbling, lonely guitar; Spring feels like a truncated version in the way it takes the exact same layout but coated in a sleek veneer. For a band that relies on organic confessionalism to drive their sound, Blush feels as though it strips Moose Blood of some of this, and the impact it has because of this is greatly diluted.

Still, while this is an ongoing quibble that runs over pretty much all of the album, that’s really the only one. From a songwriting perspective, Blush retains all of the brilliant nuance and storytelling present on Moose Blood’s debut. Tracks like Pastel and Glow ride on a bounce that radiates all the light of a midsummer afternoon, while more melancholic cuts like Sulk and Sway wonderfully highlight the vulnerability and “aw shucks” lilt to Brewerton’s lyrics. There’s a tone to the instrumentation that matches such a sentiment as well, not exactly mournful, but one of pessimism tinted with hope, like on the light-as-a-feather skip of Cheek, or the gorgeous, new wave-style guitar tone of Sway which shows some fantastically loose sticksmanship from drummer Glenn Harvey. It blends almost seamlessly with the backdrop of summer, and though it can feel a bit damp thanks to a lack of some muscle in the production, it’s almost impossible to dislike in its infectiousness and genuineness of intent.

And at the end of the day, Blush represents the beginning of the second phase of Moose Blood, the phase where things really start to pick up for them above ground. Thus, it makes a lot of sense that some of their debut’s rougher elements have been sanded off in favour of something cleaner and shinier. When put alongside that album then, Blush doesn’t stand as tall, but as a catchy, lightweight album ready for mainstream consumption, it’s pretty difficult to fault. Even so, it stands as a transitional album, not just for Moose Blood but for the entire scene that’s currently bubbling underground, and one that could well act as a conduit for them all to breakout to much bigger things. As always, it makes sense that Moose Blood are the first to represent this scene on a larger scale, a band as accessible and brimming with affability as them, something which Blush has in droves. Right now, the only direction for Moose Blood to go in is even further up.

‘Blush’ by Moose Blood is out now on Hopeless Records.