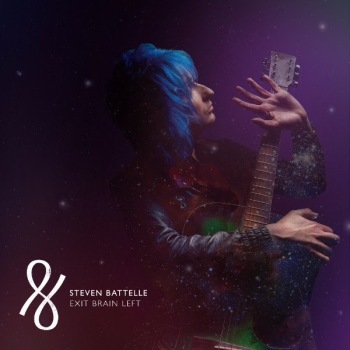 Depending on what side of the fence you were on, LostAlone were either a band way ahead of their time, or far too silly and overblown to really get anywhere. Either way, a breakup was inevitable, especially at a time when British rock’s calling card was largely faceless, down-to-earth alt-rock, the complete opposite of LostAlone. As such, to see frontman Steven Battelle emerge from his few years in the wilderness with his own solo career is a wonderful thing; bear in mind this is a man whose songwriting and compositional skills are more in line with those of Brian May and Matt Bellamy than his former peers’.

Taking that into account, Exit Brain Left makes a whole lot of sense. It’s exactly what you’d expect from a Steven Battelle solo album; flamboyant pop rooted in the ’80s that just toes the line between geeky and populist, adorned with references and subject matter plucked from way out of left field. And just like with LostAlone, it’s this flagrant ignorance towards trend-following that puts Battelle onto another winner, albeit not quite to the extent of his previous band at their best. That’s hardly a slight towards this album though; the proficiency that Battelle demonstrates as a musician allows Exit Brain Left to slide between genres with ease, all held semi-cohesively by a big, bombastic pop template.

And for an album that dips its toes in such disparate locales of the musical map as this, that’s a massive advantage to have, one which Battelle actually manages to pull off. That the cavernous strings of The Jump can lead into the eponymous track Steven Battelle which wouldn’t sound out of place on fun.’s Some Nights is an interesting proposition, but it actually works thanks to Battelle’s strident if not exactly tactful vocals (which are as much of an acquired taste as ever, especially in his power-driven caterwauling). This is pretty much true across the board too – the careening smoothness of The Ocean Chorus inspired by the Oscar-nominated Song Of The Sea; the surprisingly workable cocktail of sleigh bells and a dirty, Muse-style electro-stomp on A Christmas Cartel; the ebbing, choir-backed indie-rock of closer I’m Still Finding Out Who I’m Going To Be; none of these are natural by any means, but they feel logical, clearly the product of a man with a deep-seated love of music in all its forms. As such, there’s not exactly a flow to Exit Brain Left, rather a journey in all directions at once that does end up at a realised destination.

Of course, with this many ideas, not all of them are going to stick, and Exit Brain Left isn’t exempt from that. It’s an album that feels very bottom-heavy in that a lot of the tracks in the back end feel overweight with how much is crammed into them. As a result there’s a lot less to like about them, such as the way that Silent Movie Scream‘s squelching electronic pulse makes it feel strangely inert, or how the inflated opulence and two key changes of Absent Magic (Part 2) try to mask the fact that it’s essentially a glorified interlude. They contribute to the stodginess that this album develops as it gets towards its climax, one that feels like a disappointingly clumsy clash of ideas compared to what’s offered throughout the rest of the album.

To be fair though, they’re only minor detractions on Exit Brain Left, niggles that prevent it from being a great album rather than just a very good one. Exit Brain Left still manages to work surprisingly well regardless, an eclectic, flamboyant album that shows the break hasn’t dulled Battelle’s creative impulses whatsoever. Though it might be a bit too all over the place for some, even for LostAlone fans, Exit Brain Left can be viewed as a sort of musical CV, a demonstration of Battelle’s immense talent as a musician and how they all come into play in one place. More importantly, it’s a love letter to music itself, one that shows that Battelle is still as besotted as ever.

For fans of: Queen, Panic! At The Disco, Muse
Words by Luke Nuttall

‘Exit Brain Left’ by Steven Battelle is released on 2nd December on Suffer For My Art.