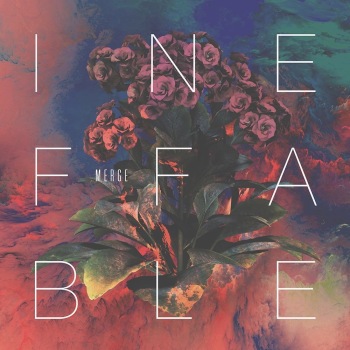 Let’s talk about Twenty One Pilots for a second. Don’t worry, we’re not going the same way as the mainstream rock media who can’t go ten minutes without mentioning the pair, lest they run the risk of losing any of that sweet moolah, but the way that they’ve infiltrated alternative culture in 2016, despite many arguing that they’re the furthest thing from, is quite staggering. The reverberations can be seen in the fact that Merge are beefing their newest commercial album with a cover of Heathens, their global megahit that wasn’t even released six months ago, but whose inclusion on the Parisians’ second album Ineffable appears to be the primary plot to bring the crowds to them.

It certainly won’t be their own work that’ll do that, as Ineffable is exactly what rock doesn’t need right now – yet another sickeningly slick post-hardcore band riding on the coattails of Emarosa and Hands Like Houses, but with a level of overproduction that’s close to reaching critical mass and a seeming inability to latch onto the sort of earworm hook that this sort of thing depends on. The reason that Heathens is the best song on here is only because of clearly defined source material; left to their own devices, the band struggle to even manage that. There’s a clear effort made to sound widescreen and epic, and there’s an undiluted strength and clarity to frontman Max Rodriguez-Medallo, but none of it actually translates into the compositional process. It means that, on tracks like Soaring or the title track, Merge fall into the highly defined trappings of a band like Memphis May Fire, one that gets by on bluster and presence without actually being able to properly articulate it.

And for a band that has flash so high on their priorities list, that exacerbates the problem even more. Ignoring the fact that the electronics designed as accompaniments are way too loud in the mix, everything here is crushed together within an inch of its life, so much so that you’d be hard pushed to find a single organic sound here. Where tracks like Helene or Face It Now were presumably intenteded to be gigantic, windswept anthems, the lack of any defined grounding leaves them as formless buzzes. Mirage is even worse, the token flabby ballad that these sorts of bands seem to be fixated with for some reason, but the complete reliance on synthetic instrumentation majorly grates and has no sort of rock snarl. Even Heathens strips away the gravity of the original in favour of a stiff piano line that could benefit hugely from some added muscle just to stop it sounding so anaemic.

Thankfully, it’s not all bad – Blood Stream manages to poke its head above the ceaselessly overcooked nature of it all and comes out as a generally competent song in the end. And to be fair, when put alongside the numerous other bands this year who’ve come through by riding dying trends, Merge are nothing close to the worst. They’re nowhere near as obnoxious or tryhardish as some of the others, and even if the constant over-emoting is something that needs sorting out fast, Ineffable has at least a shred of integrity. But the fact that Merge sink into the background instead of being outright awful is hardly a selling point, and there’s still no reason to choose Ineffable over the latest Hands Like Houses or Emarosa albums. For what it’s worth, Merge are one of the better copycat post-hardcore bands doing the rounds, but let’s just hope this doesn’t carry on into 2017. If Merge want to close the book on this whole sordid ordeal, then that’s perfectly fine.

For fans of: Avion Roe, Hands Like Houses, Sleeping With Sirens
Words by Luke Nuttall

‘Ineffable’ by Merge is released on 2nd December.