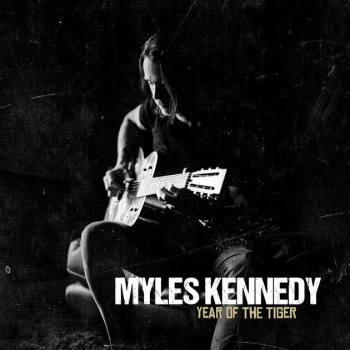 It was only a matter of time before Myles Kennedy released a solo album. As revered as he is as one of the best hard rock vocalists of the modern age, pushing Alter Bridge to their currently stratospheric heights and almost singlehandedly offering Slash an extended solo career, it was always going to be interesting to see how he would adapt in far more intimate surroundings. On paper then, Year Of The Tiger looks as though it would offer just that, stripping away hard rock bombast for something rooted more deeply in blues and country, looking inwards and focusing on the aftermath of his father’s death. If everything could go to plan, Kennedy’s first foray into the world of solo artistry could be something truly wonderful.

And honestly, it’s easy to see why some would think that this is a wonderful album because it delivers everything that was originally promised – Myles Kennedy placed front and centre, backed by layered, rustic instrumentation and arguably serving as a more in-depth view of the man than we’ve ever had before. But even so, there’s something off about Year Of The Tiger that does dampen the overall appeal, namely that, at its core, this is no different from any other album that Kennedy has been involved with. The setting might have changed, but with an instrumental setup bulked up by heavier, louder percussion and multiple layers of extra guitars, and Kennedy refusing to turn down his sky-piercing range even slightly, it makes for a strange disconnect between the intimate country-blues project that was originally intended and what could, in all essence, be a collection of reworked Alter Bridge tracks. That’s not a bad thing in itself, but Year Of The Tiger openly feels as though it wants to be both at once, and ultimately neglects the main strengths of either.

That primarily comes through in the presentation, and how Kennedy and his band clearly want to break out into a different brand of arena rock but try so hard to hold themselves back from crossing that threshold. The likes of The Great Beyond and Mother offer the most conclusive proof of this, particularly in the case of the former which, with its tumbling strings and synths, clearly wants to swell into some prog-country epic that feels totally counterintuitive with what exactly this album is trying to achieve. In a vacuum, tracks like Ghost Of Shangri-La and Songbird have a warmth that’s generally hard to overlook and avoid liking, and there’s absolutely no denying that Kennedy is a phenomenal technical vocalist, hitting heights the plenty of other singers could only dream of, but it’s harder to find a moment where both truly click, and for an album that runs long as it is, it doesn’t make Year Of The Tiger any less daunting.

Really, it’s in the writing where Year Of The Tiger finds its most stable ground, and even if moments can feel as though they too have been blown up for arena-sized appeal, the underlying themes still manage to break through and impress with just how personal it can be. Blind Faith and Nothing But A Name are poignant representations of Kennedy’s frustrations towards his father’s beliefs in Christian Science and the appendicitis that ultimately led to his passing, but switches to celebrating his mother’s courage in the aftermath on Mother, and extolling the virtues of positivity in light of tragedy on Songbird. Even through that condensed throughline, the mass appeal on Year Of The Tiger is fairly blatant, and while it’s slightly disappointing that this isn’t an entirely realised change in tactic for Kennedy that would’ve made this album a lot more interesting, sticking to roughly the same end goal but altering the method of getting there feels like a worthwhile trade-off.

And even if the expectations for this album haven’t exactly been met in the best way possible, Year Of The Tiger still stands as a crucially flawed but nuanced venture into self-exploration that modern hard rock isn’t exactly known for, and in some degree, it’s good that Kennedy is the one to do it. As much as his day job represents the peak of what this genre currently has to offer, something as ambitious and experimental as Year Of The Tiger feels like a natural next step, even if it doesn’t always come to fruition. Still, for as unnecessarily flabby and overworked as this album can be, there’s a heartfelt core that does eventually make for an album worth digging into.

‘Year Of The Tiger’ by Myles Kennedy is out now on Napalm Records.