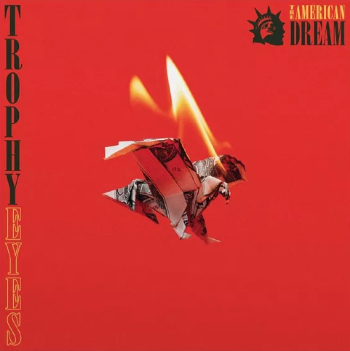 As good as Trophy Eyes’ Chemical Miracle was (arguably one of the standout pop-punk releases of 2016 in its fervent incorporation of melodic hardcore and John Floreani’s weathered storytelling), the projections of the band going forward didn’t do a lot to help it. It’s unfortunate though, because whenever a band in this scene seems to land upon something that they’ve managed to absolutely nail with pinpoint precision, they’re usually the first ones to steer themselves away from it, be that in the movement to out-and-out pop like we’ve seen time and time again already, or to new sounds altogether that just feel unworkable or severely lacking in anything potent. And to many upon picking up on even the slightest whiff of emo or alt-rock in their new material, Trophy Eyes hit both of them, a band unable to keep up a sound that had turned them into steadfast cult heroes, and instead had taken the easy route towards pop-rock for a quick and painless win.

Bear in mind though, this is a Trophy Eyes album, so that was seldom going to really be the case. Yes, The American Dream mightn’t have the throat-scraping rawness of its predecessor, but it’s in no way an over-simplification, or even all that much of a regression. It’s just as loaded in its content, but channels it differently, inspired by the two years that Floreani spent with his girlfriend in Texas and the ruminations surrounding love and identity that arose from it. That alone should be enough confirmation of how much more of slow-burning listen this album is, but it’s one that, with a tempering in sound, Trophy Eyes can commit to phenomenally well.

Even sonically, it’s not as if The American Dream is unappealing in its execution by any stretch, even if the differences between it and Chemical Miracle are stark. Where that album was rough and comprised and dark blues and slate-grey, this one feels a lot more lived-in with pastel reds and oranges, like in the burnished finish of Autumn and More Like You, or the natural creaks and twilight backdrop of A Cotton Condy Sky and A Symphony Of Crickets. What’s more, there’s a feeling that Trophy Eyes actually know how to work a sound like this to their advantage, and while the residue of polish is at its most pronounced on the spidery indie-rock guitar line of Friday Forever, that outdoorsy, natural feel is one that’s carried throughout the album. Rounded off with Floreani’s lower, raspier range, The American Dream feels like a much fuller, meatier album than so many “transitional” albums have in the past, bolstered by gang vocals at almost every turn to really set it over the top and earn both its size and cathartic intentions.

And at its core, this is another example of how wonderfully compelling Floreani’s soul-searching can be, now steeped in the atmosphere of the American south as he contemplates his standing in the world, caught in a pre-designed liminality between fame and failure on You Can Count On Me and simply wanting to take the plunge on Lavender Bay on his return to his native Australia, but also fearing the unknown and wanting to stay in a state of perpetual youth on Friday Forever. There’s such an impressively concise way of articulating it all too, going in depth in his feelings but allowing the clear, open instrumental work guide so much of the nuance and emotion. Reach the plain-spoken closer I Can Feel It Calling where Floreani wraps up his journey with the memories of love swirling around his head, and the power that’s exuded is so huge and immediately tangible, making six minutes feel like less than half of that and displaying the peak of Trophy Eyes’ ability to craft a wondrous, dense scenario in every aspect of their craft.

And that’s ultimately why The American Dream feels like the absolute best move that could’ve been made for this band, concentrating that emotion to its most powerful form, and opening the overall sound out for plenty of room to breathe. It genuinely feels like a triumph, both in how effectively Trophy Eyes have streamlined their sound without taking too much away, and in how utterly gripping this album can be so readily. For anyone writing off this album simply based on its lead singles, give it time to sit and grow on its own; in the end, the magic of The American Dream reveals itself.

‘The American Dream’ by Trophy Eyes is released on 3rd August on Hopeless Records.