Skip to content
ALBUM REVIEW: ‘Junior’ by The LaFontaines
Albums

ALBUM REVIEW: ‘Junior’ by The LaFontaines

There’s no real easier answer to why The LaFontaines aren’t bigger than they currently are. They certainly have a fanbase (which is appropriate considering how thoroughly entertaining they can be), […] 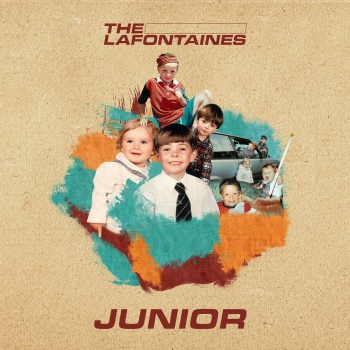 There’s no real easier answer to why The LaFontaines aren’t bigger than they currently are. They certainly have a fanbase (which is appropriate considering how thoroughly entertaining they can be), but for a band essentially shaped by their crossover potential, it’s disappointing to see that it hasn’t totally gone their way yet. After all, the fusion of pop, rock, indie and hip-hop should make for some fertile ground to grow an audience, busting down the genre walls with a sound that has the diversity to appeal to so many, and yet, besides some admirable appearances on festival bills, The LaFontaines are still a relatively small-scale prospect. The good thing is it clearly hasn’t fazed them; they’ve not been cutting back on the genre-juggling approach, and the fact that they’re currently gearing up to release their third album shows a band for whom ploughing along through adversity is an approach that they’re determined to make work.

The thing is though, in terms of sheer quality, it’s always worked; there’s genuinely not a band out there that sounds like The LaFontaines, and given that, more often than not, they’ve fully grasped a sense of elasticity that really works when sliding around their creative boundaries. Really, there’s not a great deal more they can do other than keep to their absolute best, which looks to be the aim of Junior from the start. Scaling back to just eight songs effectively eliminates the room for error, which has both benefits and drawbacks depending on which way it’s spun. Here especially, the lack of a standout sonic thread can feel a bit underwhelming, but it’s more than made up for by a lack of perfunctory flab and a degree of creativity that’s of a consistently high standard. Perhaps there could’ve been more here, but with what it does have, Junior regularly hits the mark.

A fairly significant part of that comes from the decision for The LaFontaines to generally shed their party-rock image (at least lyrically) for frontman Kerr Okan’s more personal musings, something that’s not necessarily making a beeline for incisive, deep commentary, but gives Junior a decent amount of staying power regardless. It’s somewhat more natural for his fluid rapping that has a nice sense of flow even if it’s not all the complex, but coupled with his natural Scottish accent and an unwavering sense of bravado that’s a definite trump card, it lends itself well to a crop of songs looking to move in slightly darker directions. The rumbling propulsion on All In and Alpha does a lot for their respective themes of online vulnerability and the pressures to adhere to outdated concepts of masculinity, but there’s still a good amount of depth to the portraits of shaky relationships on Anything At All and Pro, and the examination of addiction on Tomorrow Won’t Worry Me that put more stock in the writing that anything else. On the flip side, the rap-rock limitations that prevent more detailed wordplay or lyrical gymnastics remain firmly imposed and out of the band’s control, but it’s never so basic that it’s unlistenable, and The LaFontaines put in some decent legwork in crafting enough intricacy to never feel stilted or overweight.

That simultaneously allows the instrumentation to pick up a similar sense of flow and tempo, arguably the area where The LaFontaines have found the most consistent success, and on Junior, it’s really no different. It’s also where their playful, pick-and-choose method of composition feels the loosest, and subsequently the most fresh, given their ability to fashion roughly anything into a solid beat, with a far greater onus on that than consistency or overall flow. And on a broader scale, that could be a major detriment, especially when viewed as The LaFontaines still not having found a definitive sound for themselves three albums in, but their easy workaround comes with having very few issues with anything they try. The soured, low-end rumble of All In shows the band’s rock chops early on, and when compared to the rubbery summer-pop of Anything At All that wouldn’t sound out of place soundtracking a Love Island promo, or the sweeter, synth-driven indie-pop of Pro and Up, the foundations remain just as solid. Along with Jamie Keenan’s smoother hooks that draw liberally from the sentimentality of modern indie, the melting pot often remains filled, but crucially never cluttered, and The LaFontaines are canny enough to know when exactly to use each element they have.

Granted, it’s far from foolproof or a fast-track to superstardom, but Junior shows a lot of compelling evidence of a band refining and condensing what they have by an impressive amount. Even if there’s still a distance to go before it’s the absolute best it can be, everything here is lightweight and engaging enough to the point where that doesn’t really matter, at least not right at this moment in time. The LaFontaines are slowly but surely working and retooling their sound to make the most of it, and they’re ultimately getting close to something that has versatility, yet is still hugely accessible and likable. It’s not quite they’re best, but they’re getting close, and that’ll be enough to hopefully give them the huge boost they’re so deserving of.

For fans of: The Blackout, Hoodie Allen, Bastille
Words by Luke Nuttall

‘Junior’ by The LaFontaines is released on 14th June on SO Recordings / Silva Screen Records.